ITS SAFE TO BE MEN AND VULNERABLE

What most men tell me about letting their guard down is that they don’t want to appear weak, and make a fool of themselves.  Society has told them they need to be brave and strong and always in control. They don’t show their real emotions because the rejection and vulnerability  is just too difficult to deal with, especially the shame of not being enough: smart enough, wealthy enough, good looking enough or tough enough. Im here to tell you It’s safe to be men and vulnerable.

This leads to men not really knowing what they are feeling. Men have told themselves it’s not safe to feel and it’s not acceptable in society.   At work they hear, “leave your personal life at home”. They are afraid of losing respect from others, being judged and risking getting hurt.

When things  feel uncomfortable, they will keep themselves busy, by going to the gym or playing sport, watching YouTube, smoking, drinking alcohol, taking drugs or having meaningless sex, anything that distracts them from feeling within.

This creates a huge disconnection from their hearts, bodies, and sexuality.

Its easy to keep busy and avoid real feelings, but this creates all sorts of problems within themselves and especially with their  romantic relationships.  They find it difficult to get to the core truth of who they are and express what they really want and feel.  This can make a partner feel like they don’t really know them, and eventually they too will have their guard up not revealing all parts of themselves.

I want the men in the world to feel safe to be vulnerable and  talk about their feelings,

fears, desires and sexual fantasies without shame.  This is true courage.

ITS SAFE TO BE  MEN AND VULNERABLE

What real weakness is perceived by partners particularly women

is a fallacy and personally it makes me cringe.

A man in his Divine Masculine is very appealing and desirable and has these qualities:

Your partner wants to be challenged, and wants to be called out  on things you don’t like, and wants to really know what’s going on in your heart and mind no matter what  the truth is. This is real connection, vulnerability and growth for both of you.

I personally love to see men be vulnerable, as it lets me know they feel safe to be open with me.  If you feel unsafe opening up with your partner you might have to look at healing your relationship to the masculine and look at your past conditioning.

I give you permission dear men to be vulnerable,  express your fears and desires. Take the risk and see what you are capable of creating internally and externally, and do this with people you feel safe with. It might lead to real intimacy and ecstatic sex.  Notice how it feels to be incredibly honest about  who you really are  and how you really feel.

If you would like to work on your Divine Masculine and understanding women, please contact me go to my website to read more and get my free practices 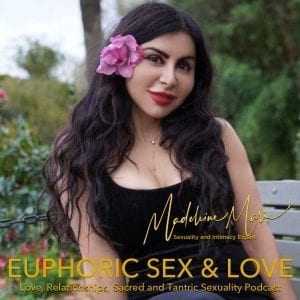 DATING AS A SINGLE PROFESSIONAL

EPISODE 6:  DATING AS A SINGLE PROFESSIONAL I chat with my friend Kate about what dating is like as a single professional, the joys and

DATING AS A SINGLE PROFESSIONAL

EPISODE 6:  DATING AS A SINGLE PROFESSIONAL I chat with my friend Kate about what dating is like as a single professional, the joys and

SEXUAL ENERGY AND HOW TO USE IT

SEXUAL ENERGY AND HOW TO USE IT Sexual energy is the primal creative energy: when making love and  creating a baby you are using sexual